1 2 ►
Add your own pictures!
HR 352 was constructed from 1978 - 1991, and a total of 802 boats were built.
The HR 352 is a highly sought after model on the used boat market. It is built extremely comfortable with aft cabin and a large engine, combined with good sailing characteristics and nice lines.

Very few changes were made during the 14 years the boat was in production:

In 1980, the rake was raised a couple of centimeters, which improved the standing height in both the front and rear cabin.

From the beginning, the HR 352 had a Volvo Penta MD 21, but the production of this engine was set at the end of 1984 and was replaced by the Volvo Penta 2003 Turbo.

1984-1985 the pantry was improved, as well as the entrance ladder and the cockpit locks drainage. Spring clamps were moved up to the top of the teak toe rail.

Around 1986 the skylight window in the saloon was increased in size to give more natural light into the lounge. The locker doors to the salon were lowered, as on the larger Hallberg-Rassy sisters. The hull was raised, but only a few inches, to get even better volume and ceiling height below deck.

Some boats were built with a larger MD 22 engine, which was an option.

The boat was built with a standard and a high rig. Initially, only standard rig was sold and finally almost only tall rigs. The tall rig is easy to know on the double spreaders and the standard one on the one spreader rig.

When the Hallberg-Rassy 352 was presented in 1978, it was described as “A boat of the future.” which is actually valid today. The Hallberg-Rassy yachts in general, and 352 in particular, will give it’s owner a lot of pleasure, and the yacht will be highly sought after the day you would like to sell her. 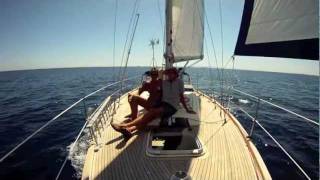 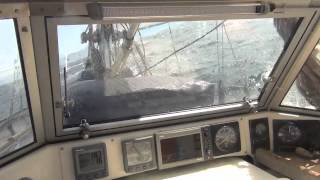 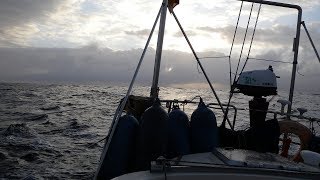 Matilda - Round Europe - Leg 1
You are very welcome to discuss the HR 352 below, and share your experiences with the rest of HR-Club. Please register at Disqus – is done very quick and easy!!
0
SHARINGS
Del på FacebookDel på Twitter

This site uses Akismet to reduce spam. Learn how your comment data is processed.