1 2 ►
Add your own pictures!
HR P-28 was constructed from fra 1955 - 1973, and a total of 536 boats were built.
HR P-28 is built in many different versions. At the beginning, all hulls and superstructures were built in mahogany and had fractional rain. At the end of the 50’s it came fractionally rich and the design of the main window was improved to two individual windows.

Already in 1963, the revolutionary GRP hull was introduced. At the same time the hull was made a bit wider. During an overlapping period from 1963 to 1966 there was a choice between wooden hull and GRP (fiberglass reinforced plastic) hull.

Colour brochure from the 1960s 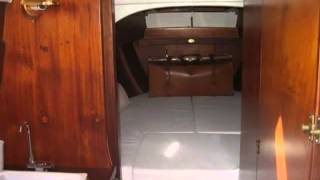 Hallberg Rassy HR P28 (TROVOBARCHE)
You are very welcome to discuss the HR P-28 below, and share your experinces with the rest of HR-Club. Please register at Disqus – is done very quick and easy!!
0
SHARINGS
Del på FacebookDel på Twitter

This site uses Akismet to reduce spam. Learn how your comment data is processed.